Scroll down if you want to skip straight to the companion planting chart. 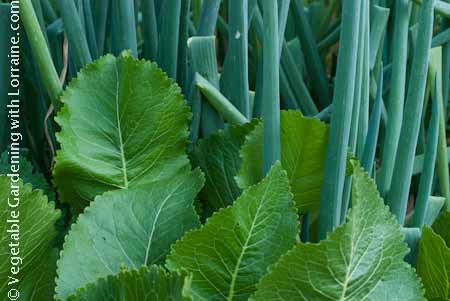 Interplanting crops that help each other is a technique that has been used by savvy gardeners for centuries to increase yields, decrease plant pest infestations, and increase the number of beneficial insects in the garden. In some cases growing a certain plant next to its friends can even improve a crop's flavor, such as planting a spinach in among the romaine lettuce or planting basil with your tomatoes.

But are the complicated lists actually accurate? Does companion planting really work at the level of “plant this specific plant next to that one”? Has it been scientifically tested?

Many years ago I read the books and studied the lists of what likes to grow with what, and what doesn’t like to grow with what. I experimented myself, and came up with some things that do seem to work. But I can’t experiment with everything on the lists myself and I don’t want to pass on misinformation on this site.

So I did a bit of deeper research into this topic to expand beyond my own experience in an attempt to separate “old wives tales” (which may contain solid grandmotherly experience, after all...) from what has some science behind it.

A Brief History of Companion Planting

Turns out that the “science” of companion planting is intertwined with that of biodynamic agriculture, a rather mystical endeavor started by Rudolph Steiner in the 1920s. Steiner is famous for founding Waldorf Schools, the anthroposophy movement, and many other new and different perspectives on how to live. (He himself was a student of Goethe, from whom he learned much about nature.)

Biodynamic agriculture does work in practice and has been shown to increase flavor, yields, and insect resistance, but it is a difficult thing for science to explain - much like homeopathy in natural medicine. Biodynamics is said to work with natural energies rather than substances... which leaves scientists scratching their heads. But what does this have to do with companion planting?

Steiner’s student Ehrenfried Pfeiffer took Steiner’s agricultural ideas, put them into practice in the US, and attempted to explain “scientifically” how they worked. He tried to determine which plants would grow well together by using a crystalline chromatography process on extracts of each plant. He figured that those with similar crystalline structures should make good companions in the garden.

This may sound off the wall to you and I in the 21st century, but I’m also hesitant to discount these claims because I do have a enough experience with the flavor difference in plants grown biodynamically to know that something is definitely going on with biodynamics, and so possibly with the ideas of plant compatibility that were generated there.

So I’ve decided to include the lists, but also tell you which information comes from personal experience, which has scientific backing, and which is untested, at least by me. Where the truth lies (truth... lies?) … well, you’ll just have to try some experiments yourself and see what works for you!

In my experience, some of the benefits of companion planting come merely from the fact that you are interplanting rather than monocropping. This means that you have a bunch of different plants growing together, rather than a big patch of only one thing. Diversity in the garden is always a good thing, because it mimics wild nature, and confuses and deters plant pests.

So the most basic rule of companion planting is to plant a variety of small flowers and herbs in amongst the vegetables to create a flower “insectary”, which will attract and house beneficial insects such as wasps, lacewings and ladybugs.

Some of the smaller aromatic herbs like thyme, oregano or basil in amongst the peppers, tomatoes or cabbage crops will confuse pests, improve crop flavor, and harbor beneficial insects.

Marigolds (Tagetes sp.) have a substance in their roots which is toxic to pathological soil nematodes, and the same substance (thiopene) gives them their strong smell. The smell distracts and confuses aphids and carrot root flies, so it makes sense to grow them among your carrots and collards.

Yarrow, daisies, borage, lovage and nasturtiums attract beneficial insects, and are beautiful to boot, so plant them in the corners or around the edges of your garden. For companion planting, most of these are too large to grow in the middle of the garden, so plant borage, lovage and yarrow around the edges. (And check out the article on beneficial insects for more suggestions.)

Calendula (Calendula sp.), aka “pot marigold”, contains small amounts of pyrethrin, a substance that is quite toxic to chewing insects. (But oddly, calendula is an edible flower by humans.) Sap-sucking insects don’t like the smell of it and tend to steer clear of areas where it is planted.

It is logical to grow plants that are heavy nitrogen feeders (like corn) along with plants that have nitrogen-fixing nodules on their roots, like beans. The beans grow up the corn, and viola! An ideal match. Throw in some vining squash like the native Americans did, and you have the famous “Three Sisters”.

You can also plant cool season crops (collards, broccoli, spinach, etc.) to the east of taller plants, to shade them from the hottest afternoon sun.

Another form of companion planting, known as trap cropping, is the intentional growing of plants that attract pests, on the theory that they will lure them away from your crops. This is a good theory, and works if you harvest the trap crop while it is infested and destroy it, which dilutes the number of insect pests you have on your crop. It may work better on a commercial agriculture scale than it does in the backyard garden.

The word “allelopathic” in the chart below means that it suppresses the growth of plants around it. Juglone is an allelopathic substance, and thiopene repels sucking and chewing insects like slugs and aphids.

Check out my FREE
ebook and newsletter
!
Stay up-to-date with the best tips and techniques for vegetable gardening in harmony with nature's wisdom.