Scroll down if you just want to go straight to the Common Plant Diseases Gallery.

Writing about plant diseases is challenging because there are thousands of them, and what is a common plant disease in one region may be unheard of in another because conditions there never favor it.

In addition there are some crops that are just more prone to disease than others. Tomatoes and plants in the squash/cucumber family fall into this category.

On this page I cover the common plant diseases that can occur across regions when conditions are right. For more extensive and regional information on plant diseases, check your local State University Extension Service.

A Bit About Plant Pathology

Most common plant diseases are caused by one of three types of organisms: fungi (most common), bacteria, or viruses. For the home gardener, and especially an organic gardener, there are limited (but not zero!) treatment options available against many of these pathogens.

My standard toolbox against common plant disease consists primarily of what are called “cultural controls”, which means utilizing the Ten Organic Tools in the article Preventing Plant Diseases. "An ounce of prevention is worth a pound of cure" certainly holds true in the vegetable garden.

There are also some common plant “diseases” (particularly in tomatoes) that come from mineral deficiencies, inconsistent watering, or fluctuations in temperature. These include tomato leaf roll, blossom end rot, and catfacing, and they are covered in detail in the article on watering tomato plants.

The Ten Most Common Plant Diseases 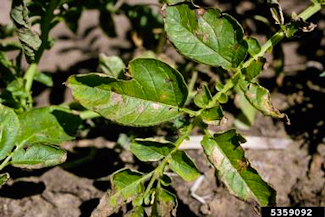 Early blight is perhaps the most common plant disease affecting tomatoes, and tends to occur earlier in the growing season. It causes dark brown spots on the leaves and sometimes the stem near where it branches. The little spots can start out yellow, but they soon enlarge and turn dark brown, showing an even darker concentric ring pattern. As the disease spreads, the small spots can merge with each other and become big brown patches. Early blight starts at the base of the plant, eventually causing the leaves to wilt and die. (Photo credit: Howard F. Schwartz, Colorado State University, Bugwood.org) 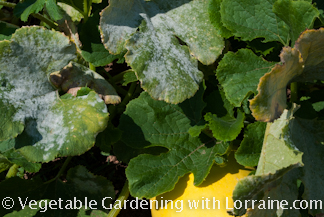 Powdery mildew is so common that I wrote a whole article just about powdery mildew. It can affect many vegetables, but the cucumber/squash/melon family seems to be particularly susceptible. It starts out as little soft gray patches, but it can soon take over whole leaves, causing them to turn almost white. Neem oil can be an effective control, but the best control of all is to keep the leaves dry, especially in hot weather, which means watering at soil level. Many people also use Bordeaux mixture as a control, which can be effective against a number of fungal diseases. 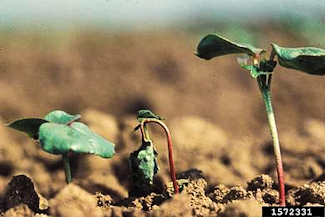 Damping off is usually painfully familiar to gardeners who start their own seeds indoors. One day a seed flat is full of vibrant little seedlings stretching for the light, and the next day there’s a shrunken place on every stem where the seedlings have wilted and toppled over. Damping off is most often caused by different species of fungi, but it is also sometimes caused by oomycetes or viruses. (Photo credit: Gerald Holmes, Valent USA Corporation, Bugwood.org) 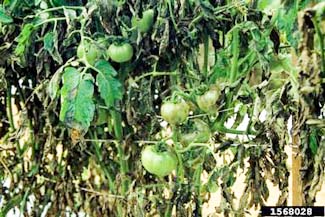 Late blight Develops later in the summer, and causes large areas of the leaves to turn dark brown. There are other diseases that can do this too, but a definitive mark of late blight is the presence of fuzzy mold-spore stalks on the undersides of affected leaves and sometimes on stems. These are most visible with a hand lens or on a digital “macro” photo taken early in the morning. (I’m amazed by what I sometimes am able to see when I use my cheap little Sony point-and-shoot camera in macro mode.) Another definitive mark of late blight is that the spots can be kind of waxy-looking. (Photo credit: Edward Sikora, Auburn University, Bugwood.org) 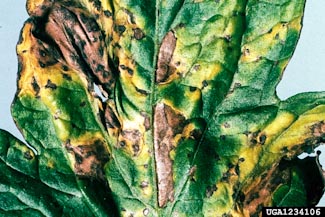 Gray leaf spot refers to at least two different diseases. One affects corn and other grasses (yes, corn is a grass) and is caused by the fungus Cercospora. A different fungus, Stemphylium, causes gray leaf spot on tomatoes and peppers. The gray spots it causes are generally surrounded by a yellow halo, and the center of the spot eventually dies and turns brown. As it spreads the spots merge, and the whole leaf will die. (Photo credit: Clemson University - USDA Cooperative Extension Slide Series, Bugwood.org) 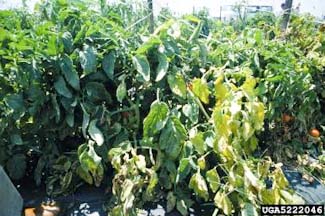 Fusarium wilt and Verticillium wilt are very similar diseases caused by two different species of fungi. The symptoms can start at the top or bottom of the plant, and as the name implies, cause drooping or wilting of leaves, eventual discoloration, and finally leaf death. The organisms live in the soil, and enter the plant through the roots. They take up residence in the vascular system of the plant, where they party on and reproduce until they clog the vessels and cause the plant to start to wilt, usually not all at once. Again, the tomato/pepper/potato family and the squash/cucumber family are most susceptible, though they can also hit beans and other crops. (Photo credit: Florida Division of Plant Industry Archive, Florida Department of Agriculture and Consumer Services, Bugwood.org) 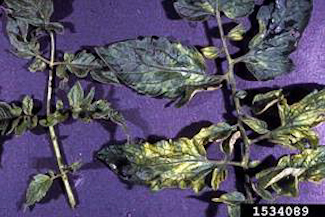 Tobacco mosaic virus (Tobamovirus and its many spinoffs) is truly ubiquitous, meaning it occurs everywhere, all around the world. It causes the most damage in the Solanacea family of crops (tobacco/tomato/pepper/potato), but also hits beans and cucumbers. It can cause a whole range of symptoms: mottling of leaves where dark green, light green and yellow patches give a mosaic appearance, distortion of leaves from a 2D to a sort of 3D texture, wilting and general stunting. It doesn't usually kill the whole plant.

I used to work in the plant lab at AeroGrow International, and we had to stop allowing smokers into the lab, even if they washed their hands. TMV is ubiquitous on tobacco products, and once we had to destroy all the plants in the lab and sterilize everything because TMV came in and affected every plant. I'm not judging smoking, just suggesting that if you are a smoker and want to grow tomatoes, make sure you purchase TMV-resistant varieties. (Photo credit: University of Georgia Plant Pathology Archive, University of Georgia, Bugwood.org) 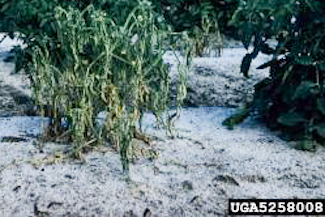 Bacterial wilt (tomatoes) This is only a common plant disease if you live in the South. Symptoms usually come on fast, and there really isn’t much you can do to control it. It is caused by a bacteria that enters the vascular tissues of the plant through a wound of some kind. The bacteria multiplies in the vascular system, “clogging the pipes” and causing the plant to start to wilt near the base, and then one day rather suddenly, wilt all over and die. (Photo credit: Florida Division of Plant Industry Archive, Florida Department of Agriculture and Consumer Services, Bugwood.org)

Blossom end rot is caused by not enough water. The tomato starts to form, but if it doesn't get enough at the critical time, the blossom end of the tomato will die.

Tomato leaf curl is caused by calcium deficiency, which believe it or not, happens when a tomato plant receives inconsistent watering. The wet-dry-wet-dry cycle disrupts the plant's ability to take up calcium, which makes the leaves curl up and get leathery.

For detailed information on these and other tomato problems, visit the watering tomato plants article.

What to Do If Your Plant Is Sick

If your plants are sick, the first thing I would recommend is taking a couple of close-up digital photos of the problem and emailing them to your local State University Extension Service. While they cannot make a 100% definitive diagnosis without a plant specimen to examine under a microscope (which generally costs money), they have “seen it all”, and can probably make a fairly accurate guess as to what is affecting your plant. They can also make specific recommendations for how to control the problem, though many of their suggestions may not be organic choices.

Next, carefully remove the affected leaves (or even whole plants if they are badly affected) and destroy them, being careful not to touch non-affected parts or nearby plants. I carry out a disposable trash bag, put the diseased plant parts in there and carry them to the dumpster in our alley. Wash your hands and change your clothing afterward, before working again with healthy plants. And NEVER compost diseased plants, because many pathogens will survive the composting process.

Neem oil can be effective against a number of common plant diseases, especiall the fungal and viral ones. After removing the worst-affected leaves, spray neem oil on the surrounding leaves according to the label directions.

Make and spray actively aerated compost tea. The good microbes in this can fight off the disease microbes... really!  Just like cultures who eat lots of real, unsugared yogurt and live, fresh sauerkraut hardly ever get stomach bugs... really!