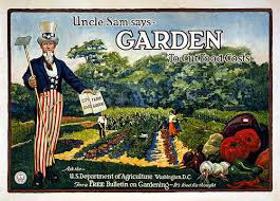 Anyway, I decided to try to find some interesting bits to add some seasoning to what could otherwise be a rather bland dish.

Our distant ancestors of 12,000 years ago were hunter-gatherers, which meant they were nomadic, having to break camp and move all their stuff every time they’d outstayed their welcome by hunting all the local rabbits and deer, and eating all the berries off the surrounding plants.

One day it occurred to the smartest cave woman that she wouldn’t have to keep schlepping her stuff all over creation if she planted the seeds of the berries she was eating. She just had to make sure the seeds didn’t dry out, chase the rabbits away while the plants were little, and "Voila"! She could keep Grok happy, and they wouldn’t have to keep leaving every neighborhood they’d grown to love. 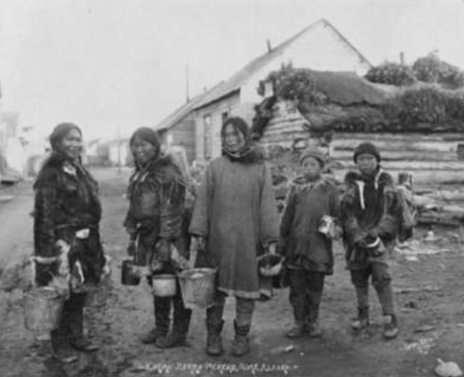 To the right is a “new” (1939) photo that shows some remnants of that ancient lifestyle. These Inuit people are just back from picking berries. I admire the craftsmanship of their handmade clothing, and the living roof on the log cabin behind them.

As humans became less nomadic, village life slowly developed, which brought about more specialization of labor. Not everybody had to be a gardener or a goatherd - there were artisans and craftsmen who created useful objects like tools or clothing in return for their food.

While credit for being the first gardeners generally goes to the neolithic people of the “fertile crescent” in the middle east, it’s more likely that the cultivation of plants and animals arose in several places in the world between 10,000 BC and 7,000 BC. There is evidence of early vegetable gardening in southwest Asia, China, South America, Africa and India from this time period.

By the time of ancient Greece people were very skilled at growing barley, figs, olives, apples, sesame seeds and a number of different vegetables including cabbage, onions, and asparagus. From early in vegetable gardening history, people began not only growing what they liked best, but they began selectively breeding vegetables for the traits they most favored, like early harvest, larger fruits, or longer shelf life.

History of Vegetable Gardening in the Americas

In the "New World" (a Eurocentric word), the early people of Central America developed corn, which they bred into hundreds of varieties that have now become a staple food and fodder crop around the world. Tomatoes, potatoes, peppers, and beans are all western hemisphere crops that made their way back to Europe with Columbus and other explorers.

In South America, the Peruvians domesticated the potato, which now has now been bred into thousands of varieties of every imaginable size, shape, and color, and spread around the world as a staple calorie crop. 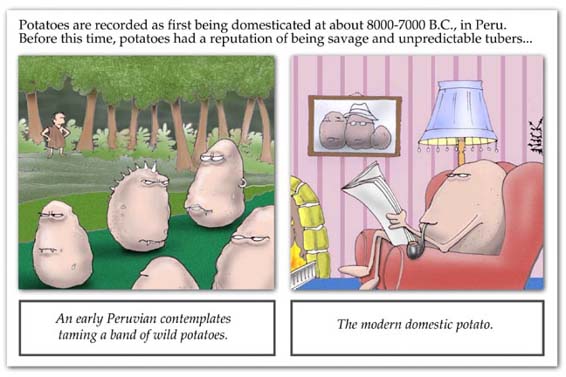 And in the land now called the US, early peoples planted what they called the Three Sisters, which consisted of squash, beans and corn. These three vegetables are still grown together today, because the beans provide nitrogen that the corn is hungry for, the corn provides the beans something to climb up, and the squash provides shade over the ground which helps retain moisture. All three make excellent drying and storage crops for survival through long winters or when meat is scarce.

History of Vegetable Gardening: From the Pilgrims to the Pioneers

At the time of the Pilgrims, almost everybody was a gardener, which when you can’t go to the supermarket, means pretty much full-time work to assure survival. Barley, peas and their new love, corn, were primary staple crops, but the Pilgrims also grew carrots, onions and other vegetables from seeds they brought with them from England.

The skills of vegetable gardening were still held by the masses at that time, because gardening was not really optional if you wanted to eat. It certainly was not a hobby to be enjoyed! And as soon as the early settlers became wealthy enough to not have to do the gardening themselves anymore...

They forced their slaves to do it. The history of vegetable gardening and farming in the early years of US history is intertwined with slavery. Slaves were used in all aspects of gardening and farming, from breaking raw ground with mules to planting, irrigating, and harvesting cotton and tobacco, as well as maintaining the plantation gardens that fed the master’s family. The slaves also maintained their own vegetable gardens and chickens. 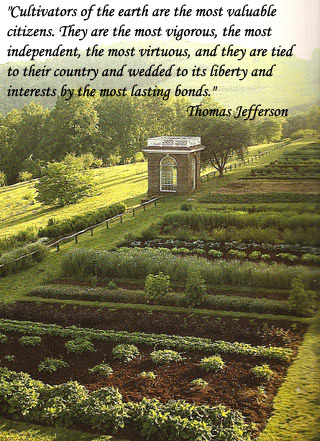 The most famous gardener (and slaveowner) in early America was Thomas Jefferson. Gardening was his personal passion, and the extensive gardens he and his slaves created at Monticello are recreated there today. Jefferson collected vegetable varieties from around the world, bred and tested them, and selected the best for seed saving. He kept very detailed and careful records of his gardening experiments.

As expansion westward began and people expanded into new territories, they took seeds with them and started vegetable gardens wherever they settled.

But then came World War 2, which is an important chapter in the history of vegetable gardening. Wars are notoriously expensive pastimes, and tend to suck up resources as well as men. Both in England and America, people were encouraged to grow as much of their own food as possible to help the war effort. The “Victory Garden” became a means and a symbol of self-reliance, fortitude, and patriotism.

In England, everyone was expected to grow gardens to supplement their diet, since food rationing was severe. Government-sponsored advertising campaigns extolled the virtues of carrots especially, and posters helped everyone get in the spirit of growing food again. My friend John Stolarczyk over at the World Carrot Museum has done a phenomenal job documenting the importance of the humble carrot to the English people during WW2.

To give you an idea of how rough food rationing was in England, this is the table of how much one adult was allotted per week (exceptions noted):

When the war ended, the chemical factories in the US that had been making nitrogen for bombs switched gears, and started touting nitrogen as a fertilizer for farms. This was the start of chemical farming and vegetable gardening, and also the start of the environmental degradation that went along with it.

There is a new vegetable gardening revival underway - in particular organic vegetable gardening. Now that the environmental and health consequences of chemical gardening and farming are becoming apparent (not to mention the dangers of GMOs, another story), there is a renewed interest in growing our own healthful, organic, sustainable, local food.

The Victory Garden now represents victory over destructive environmental practices, destructive eating patterns, lifestyle diseases and obesity. It represents freedom and patriotism in a new way. Michelle Obama took a bold step in championing organic gardening when she tore up a bunch of White House lawn to plant an organic vegetable garden. (There were unintended political ramifications to this, covered elsewhere in the news...) 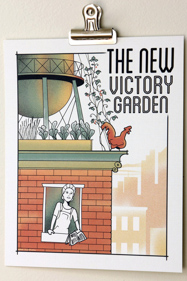 Here is a modern Victory Garden poster by Portland artist Joel Wirtheim. He has many other posters and cards for sale over at Victory Gardens of Tomorrow.

Joel's wonderful posters celebrate this revival of interest in growing our own food. I encourage everyone to carry on the long "history" of vegetable gardening by growing their own new victory garden. Together we can support our own health and the health of our beautiful planet.

Blessings on your garden!